To read article in Tamil in PDF.

Today, many people consider India to be a developing country, or a polite way of saying that Indians are “poor”. There is truth in this observation. Despite the dazzle and comforts of city life, air travel, multi-storied malls and Smart Phones, the majority of Indians lead a rough life. People attribute India’s continued poverty to many causes such as government corruption and ineptitude, poor infrastructure, social inequality, communal conflicts, and lack of innovative spirit.

In the same breath, we also say that India is one of the oldest civilizations, i.e. that it has one of the longest histories of any country, or rather people lived here for many thousands of years continuously. On top of that, we are told that the British made Indians civilized and prosperous.

In this article, the question we are asking is “Was the geography that we now call India alwayseconomically backward?” Specifically, we are focusing on the economy aspect of overall prosperity.

How does one measure economic prosperity? For example, today, we say that the USA is a very prosperous country. What does this mean?

We use a number called GDP (“Gross Domestic Product”) that is calculated for every country. Higher the GDP number, more prosperous a country is. GDP is supposed to measure economic activity of a country. GDP is defined as the value of all goods and services produced by a country in one year. The more a country produces, which then gets consumed locally or exported globally, the higher the GDP. For example, today, the world buys expensive items like Hewlett Packard laptops, Apple iPhones, and Boeing aircraft from the USA. People in the USA also consume large quantities of goods and services, much more than anywhere else in the world. Hence, it is no surprise that the GDP of USA is the highest in the world today.

To illustrate how we are going to use GDP, I performed a simple analysis of GDP data for the year2017 published by the International Monetary Fund (1):

This means that when the world citizen spends Rs. 100, Rs. 25 of that revenue goes to the USA. Now you can imagine why USA is economically prosperous, even without visiting it!

Now we should be able to understand statements such as this in the news “PM Narendra Modi today called for targeting double-digit GDP growth … and said India’s share in world trade has to more than double to 3.4 per cent.” (2)

Now, how are we to understand the economy of countries in the past? Indians must thank an economist Angus Maddison (3). He was a Professor of Economics in The Netherlands. He extensively research to compare the economies of many countries and how they evolved over time. He went backward in time – not a year, not a decade, not a century, but two thousand years!

Prof. Maddison collected a lot of data over many years. The best way to understand what he found is by looking at the chart below (4). 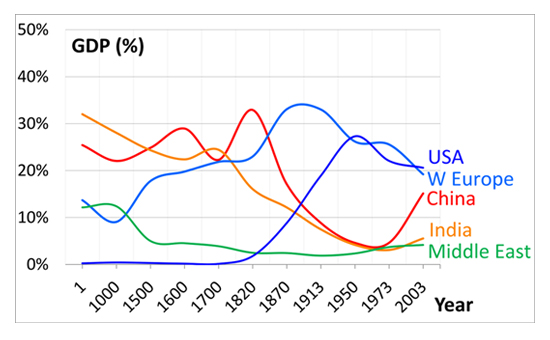 Looking at this chart, we can make the following observations:

1. India was the most prosperous country for the first 1,500 years of the Current Era

2. India’s share of the global GDP started plummeting from a high of 25% since late 1700 all the way to under 5% at Independence.

3. After the British entered India and established their regime, the economy of Western Europe increases dramatically from around 1800.

So, if I were to ask the question “How economically prosperous was India 300 years ago”, we should be able to see that “India was as relatively prosperous then as USA is today!”

S. Gurumurthy’s talk at IIT Bombay in 2010 (5) provides a very good introduction to this topic.

Pay closer attention to the economic trends of India and Western Europe. Less than a century after the British entered India and establish themselves firmly, European economy begins skyrocketing for almost 150 years. Raj Vedam (6) says that this is not a coincidence. He attributes this to transference of wealth from India.

Let us see what the plundering British themselves had to say. Robert Clive (1725-74) was the Commander-in-Chief of British India. He created ownership of the lands of what is today India, Pakistan, and Bangladesh, and established a process of funneling wealth out of India to Britain. He said that India was “a country of inexhaustible riches and one which cannot fail to make its masters the richest corporation in the world” (7). At that time, the state of “Bengal” alone, which was the richest “state” in India, was richer than the entire Britain!

When an American philosopher Will Durant visited India in 1930, 175 years after Robert Clive’s planned campaign to destroy India began, Durant was so horrified at the destruction wrought by the British (8) that, instead of pursuing his goal of writing his book “The Story of Civilization”, he took up writing to inspire Indians to fight for Independence. In what he terms as “The Rape of a Continent”, he says “But I saw such things in India as made me feel that study and writing were frivolous things in the presence of a people-one-fifth of the human race – suffering poverty and oppression bitterer than any to be found elsewhere on the earth…” Raj Vedam highlights actions by the British that choked India (6).

●The cost of British conquests (including first and second world wars), developments in Britain, and administration of India, were all charged to Indians.

●Indians were forced to sell cheap and buy exorbitantly.

●Indians were taxed twice as high as in England and thrice as in Scotland.

●Millions of dollars’ worth of bribes from rulers who were dependent on favours and guns.

Hence, it is accurate to say that the British rule decimated Indian economy and ruined India. Yet, today, our children are taught that it is “the caste oppression” that made India poor!

In conclusion, India was one of the most economically prosperous countries in the world for a good bit of the known past. The British rule is probably the most significant factor that contributed to India’s poverty.

Let us remind ourselves that “Colonization” is never beneficial for the colonized people. If we study history properly, we will likely find that every colonized country was culturally and economically prosperous, and each such country is in various states of struggle or ruin today.