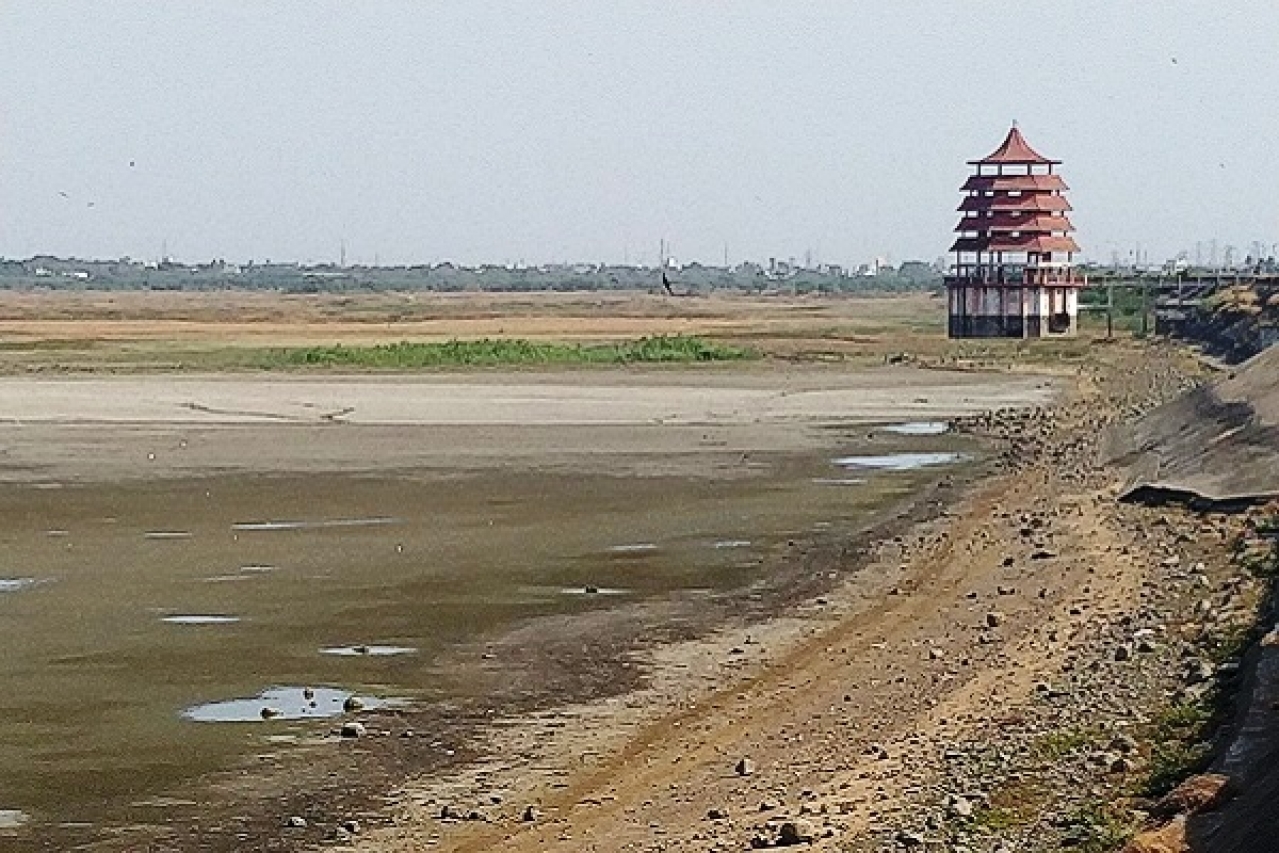 A dried up reservoir in Chennai (@Jay_Apoorva18/Twitter)

The second term of Prime Minister Narendra Modi is the beginning of the most crucial period in the history of India’s water sector. All the alarms raised by experts, media and common citizens are coming to pass. As city after city moves closer to Day Zero, the land of rivers, lakes, wells and tanks fed by a bounteous monsoon is on the verge of becoming the biggest victim of mindless, non-strategic development exacerbated by climate change.

In the nearly two decades that I have been writing on water issues, not a year went by without ominous reports projecting the running out of groundwater, the overuse of rivers and the degradation of water bodies into receptacles of sewage and filth. But, it was also a period of explosion of water treatment technologies that could turn seawater, brackish water and even sewage into ultrapure water. There was despair but also conditional hope. The condition was good governance.

The Asian Water Development Outlook published in 2007 said that if there was a water crisis in the future, it would not be on account of a physical scarcity of water but a scarcity of management. In other words, poor governance and inadequate institutional arrangements were the real challenges, not actual availability of water. The proof of this lies in the manner in which countries such as Israel and Singapore have moved from scarcity to security by simply being strategic in their thinking.

I remember the words of an Israeli expert I met in 2011 who said that by 2015, his country would not depend any more on rainfall. That statement had sounded rather presumptuous to me. But in my travels, I saw purple pipelines carrying reclaimed wastewater all over Israel’s countryside along with new seawater desalination plants coming up to complement the existing capacity.

In 2011, Israel was working towards achieving 100 per cent water recycling by 2020 and now in 2019, the country is well on track to reaching the goal.

Meanwhile, Singapore, with its polluted waterways, overcrowded river banks, and poor sanitation was no different from its Asian neighbours until the 1960s. There was hardly any land available to store the abundant rainfall; there were no groundwater reserves either.

The island-nation was heavily dependent on imported water from Malaysia. In its 1972 Water Master Plan, Singapore outlined a strategy to proceed with surface water schemes as fast as possible to increase supply to a growing population.

It is amazing that in 1972, the master plan already envisaged unconventional water sources such as desalination, water reclamation and putting barrages across the estuarine rivers to supplement surface water sources. It even visualised an increase in catchment area from 11 per cent to 75 per cent of the island and to implement pollution control measures so that this increase could be sustained.

With such a clear, far-reaching master plan in place, Singapore’s fathers set out to make the necessary legislations, create appropriate institutions and ensure good coordination between all the ministries and agencies working on water issues. The Clean Air Act and Water Pollution Control and Drainage Act were passed.

Today, Singapore not only has diverse sources of water to draw upon but over decades, it has become a hub for research and holds the Singapore International Water Week which attracts water professionals from all over the world.

Historically, despite being a leader in rainwater harvesting, irrigation engineering, and community management of water, India failed to chart a path of judicious development after Independence. There has been no policy factoring in the water-energy-food nexus even as India’s population is racing to beat China’s by 2024.

In Punjab, free power to farmers led to a dramatic upsurge in the cultivation of rice which lowered the water table to dangerous levels from which it has still not recovered. There has been absolutely no overarching long-term strategy to allocate responsibilities and to manage supply and demand of water in its entirety.

This has led to centre-state, urban-rural, inter-ministerial, inter-state and many other divides riddled with conflicts and confusion.

The Modi 2.0 government has shown its intention to tackle the water challenge by combining a bunch of ministries which were previously handling the water sector in a fragmented manner into one integrated Jal Shakti Mantralaya. Providing safe piped water to all has been announced as a major goal and PM Modi has made a nation-wide call to conserve water.

In his previous term, the NITI Aayog developed the Composite Water Management Index in order to create a culture of data-based decision making for water in India as well as help to rank states in terms of their water governance.

The Swachh Bharat Mission is well on track to help India achieve the Open Defecation Free status. Several projects are ongoing under the Namami Gange programme to clean and rejuvenate the Ganga.

All this is good news. However, the crisis is far from being averted. One of the projects being prioritised by Modi 2.0 is the interlinking of rivers, which is being perceived by many citizens as a solution to the problem of drought and floods in the country. The thinking is that when the rivers in the north and east are flooded, the excess water will flow down to the rivers in the west and south, thereby helping in equitable distribution of water.

Unfortunately, such a neat solution exists only in an ideal world. Some countries such as Canada have even imposed a ban against inter-basin bulk transfers and man-made diversions. I will not get into the environmental impact of this project – the destruction of wildlife, forests and wetlands nor will I speak about the human impact caused by displacement of people, lest I get mistaken to be an NGO in the payroll of foreign powers.

However, it seems to me that the Indian government is making a mammoth mistake by not paying attention to how climate change is playing out in South Asia. Intensified droughts, unprecedented heat waves, short events of extreme rainfall and cyclones – these are becoming very commonplace in a warming world but in India, the effects have been particularly catastrophic.

The monsoon itself is weakening since the past 80 years despite the large amounts of rainfall that is being dropped over short periods of time as a result of global warming which causes the atmosphere to hold more water than before.

In such a situation, it makes little sense to connect distant rivers. The pattern being observed now is intense rainfall over short periods followed by no rain for long periods. Imagine a network of empty river beds and canals with occasional water flowing through them – that could well be the fate of the grandiose river-linking project after a decade or even earlier.

Do we want to destroy nature and livelihoods to build this prohibitively expensive network but end up getting not even a fraction of the benefits imagined? This is not to say that inter-basin water transfer projects should be opposed ideologically; on a case by case basis, some individual projects might be justifiable.

What India really needs is a massive programme to recharge groundwater all over India coupled with an intelligent agriculture policy (since agriculture withdraws 90 per cent of India’s water) would not only fill wells and tanks but make the rivers flow in dry season and even reduce the flooding during storms.

In many parts of the world such as Holland, China, USA and Singapore, the hard, impermeable surfaces of cities are being turned into “sponges” which soak in excess rainfall. China is building 16 sponge cities with permeable pavements, rain gardens, grass swales, artificial ponds and wetlands.

Water guzzling crops like rice, corn and sugarcane must be phased out of states where groundwater levels are dropping. A case in point is the revival of millet cultivation in Karnataka, Andhra and Telangana.

Elders in these places, which are often as dry as Rajasthan, remember that millets were their staple diet some 40 years ago before rice and wheat invaded their fields. Farmers switching to millet with government incentives are not only freeing themselves from high water use but are also reaping financial benefits.

India also needs to invest in planned wastewater reuse in the manner of Israel, Singapore and other countries. Gujarat is planning to create a wastewater grid for use by industrial clusters.

Treated wastewater can serve as an excellent source of alternative irrigation which can also save the cost of fertilizers since it is rich in nutrients. Of course, the safety aspects must be taken into account since wastewater can be a source of pathogens, but these risks can be suitably managed as many countries have shown.

India has been talking about setting up desalination plants along its coast for a long time. Today, desalination technologies have greatly advanced and if one looks around, some remarkable cost-effective innovations have been developed both with and without the use of membranes which can remove even the nanoparticles of pollutants that are being dumped into the environment by our mindless lifestyles.

By now, India should have had scores of desalination plants up and running with public-private partnerships. No more time should be wasted. And yes, even though desalination is an expensive option, its costs have been going down and it cannot be ignored any more as an important option where seawater or brackish water are available in abundance.

Increasing the supply will all go to naught if the demand side is not managed efficiently. Every city with a piped network needs a comprehensive loss management programme and a sensible pricing of water. Many Indian cities are losing revenues from as much as 40 per cent of water from their pipe networks on account of leakages as well as theft and metering inaccuracies. At a time when smart technologies are available to detect, monitor and control these losses, such inefficiencies cannot be permitted.

In the Mahabharata, Vidura says that the gods do not give sticks for self-defence to those whom they want to protect, they give them intelligence. It will be a pity if India, with all its intelligence and variety of options, is not able to protect its water and thus the lives of its people.